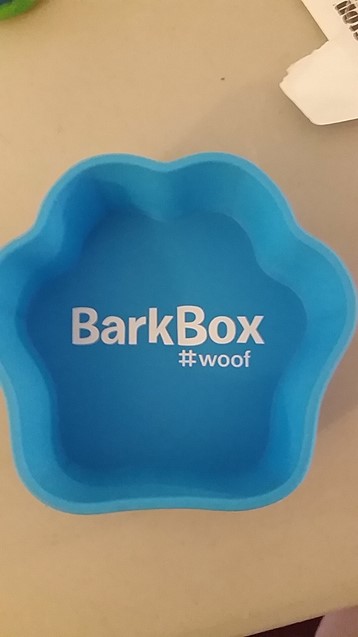 What a great start to my first of six months of BarkBox! I decided to go with the medium dog option, since my dog Rhiannon is a consummate chewer. Rhiannon, a one and half year old Cairn Terrier and Yorkie mix, is devilishly smart and will do anything for a good treat, so it was a joy to receive this BarkBox subscription as a gift. Here is a picture of her being her gloriously dapper self. 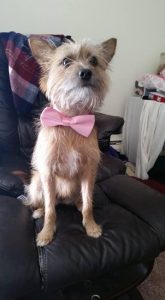 Now, onto the review! 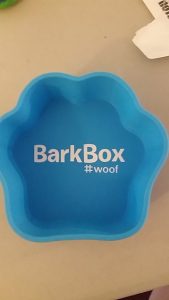 This little bowl is neat! Both dishwasher safe and entirely collapsible; I’m excited to take it hiking with me and Rhia. 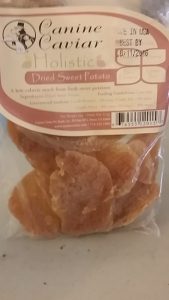 I was so excited to see a Canine Caviar item in the BarkBox! They’ve long been one of my favorite dog food brands due to their commitment to holistic, natural ingredients. It has just one ingredient– dried sweet potato, which is a great, low cal, and nutritious treat for dogs.Though advertised as a rawhide alternative, it definitely doesn’t last as long one. Rhia snarfed hers up in about 30 seconds. That said, she loves the taste and as far as treats go, you can’t get much healthier than this. 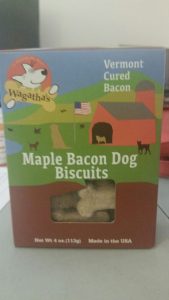 I was a little bit leary of this treat item since Rhia isn’t a huge fan of biscuits, but she did love these! She immediately ran off with one and crunched it in her dog bed. The ingredient list is also something to be excited about. I’m no fan of overly complicated ingredient lists for either me or my dog, so knowing this treat only has four natural ingredients is definitely reassuring. With organic barley flour, Vermont smoke and cure bacon, organic maple syrup and organic cinnamon, it sounds almost good enough to eat for myself! 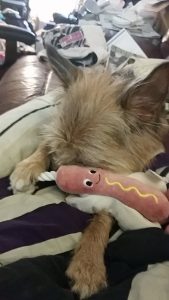 Rhia has one chief fault: she’s a stuffing serial killer. She absolutely loves stuffed toys, but look away for one second and she will tear out the seams with surgical precision, leaving stuffing scattered everywhere. Sadly, this cute hot dog was not an exception. She tore out the squeaker and half the stuffing in around 15 minutes. Thankfully, the hot dog is also composed of a rope skeleton, so at least half of it is still intact! 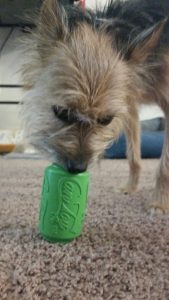 Both my and Rhia’s favorite toy of the bunch! A winner in both design and functionality, it essentially functions as a soda shaped container to stuff treats inside. I put some peanut butter around the rim and it honestly looked like she was drinking a soda! How cute! For a smart dog like Rhia, toys like this really are a blessing. It takes her a long while to try to get the treats out, and the material is durable enough to hold up to her incessant chewing habits. It even keeps her more occupied than her Kong, she’s still tossing the soda can around trying to dislodge the treats I put at the bottom.