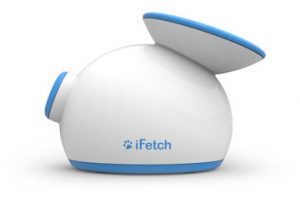 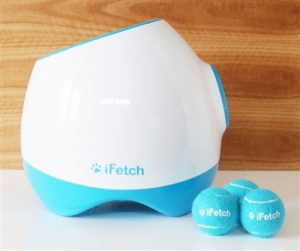 What is iFetch Too Interactive Ball Launcher?

The iFectch is an automatic ball launcher that was created specifically for dogs. It has a slick design and is capable of operating either on main power or battery. There’s settings that will allow you to choose the range you prefer – it can be used both inside and outside.

The iFetch will keep your dog entertained for hours on end. All you have to do is plug it in, and drop a ball in the funnel. When you’re tired of playing, your dog can continue playing fetch with iFetch. So, when you run out of energy and your dog still has plenty of anger, this doesn’t mean his game is over. Your dog will happily play fetch for hours while you’re answering the phone, cooking, cleaning, or doing whatever you normally do during your day.

Why Would an Automatic Ball Launcher be Useful?

Whether your four-legged best friend enjoys playing fetch or flyball someone needs to be there in order to toss the ball. Until recently, the pet owner was responsible for tossing the ball, but then dog ball launchers started to be introduced on the market and from here on out, you can sit back, relax and watch your dog as he plays. Of course, you can still interact with your dog and encourage him to get the ball and return it to the machine.

The biggest advantage to using the iFetch would be the fact that your dog will be able to have fun, play and get exercise they need, without needing to have you around.

How Does the iFetch Work?

The iFetch really is easy to use – the dog simply places the ball in the automatic ball thrower (you will need to train your dog to do this) and the ball will then trigger the launch. The trigger is easy with iFetch – basically, when the dog drops the ball into the iFetch, it will launch within a couple of seconds. The ball will automatically be tossed according to the range you have it set to.

Does the iFetch Really Work?

There’s a reason many people have labeled iFetch one of the best automatic ball launchers for dogs. Mind you, it’s not purpose, but it definitely deserves its spot at the top of the charts.

The round, bi-colored device is similar to a UFO If you put it side by side with other ball launchers and compare it, you’ll see that you really do have a gem here.

Runs on Battery and Main Socket

Many people may choose to use this product indoors and during this time, they can plug it in to their main socket (it has a 10ft cord). This doesn’t mean you cannot use it outside or have to run an electric extension to it – to use it outside, all you have to do is set it on battery mode (it includes rechargeable batteries).  On fully charged batteries (6 c-cell batteries), the iFetch can throw balls for around 30 hours.

The iFetch has three launch distance settings to choose from. So, whether your dog is a tiny dog that doesn’t run far or a hardcore runner, you can set it in order to make sure it caters to him. You can set the launch range to 30 feet, 20 feet or 10 feet.

Of course, there are a couple of cons we need to tell you about.

For starters, it requires a special tennis ball. You cannot place a regular-sized tennis ball in the iFetch. It accepts miniature 40mm or 1.5 tennis balls. They are not the same size as the miniature tennis balls you can get in the pet store, so just to be on the safe side, you should buy a set of official iFetch Balls.

Yes, you will need to train your dog to fetch from the iFetch, because if he stands in front of it, it’ll hit him. Worst case though would be your dog taking the ball once, but afterwards, he’ll learn his lesson. All in all, if you’re looking for an automatic dog ball launcher, then the iFetch is a viable option.